Fear, anxiety, and self-consciousness help not the street photographer 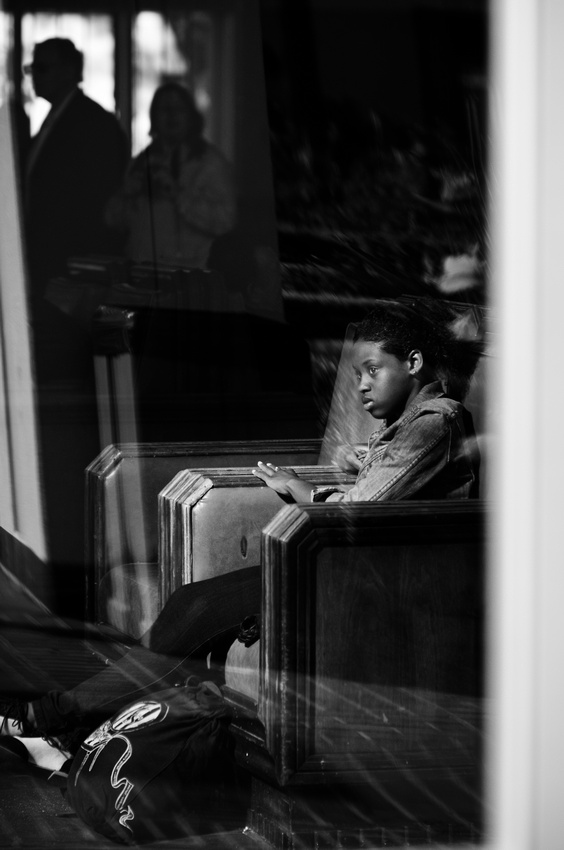 Fear, anxiety, and self-consciousness help not the street photographer.

Looking back at the last year of my photos I can really see the difference in how I was shooting. I was very self-conscious of purposefully photographing complete strangers in public. I was also fearful of what negative reaction I would get if the person realized what I was doing. What is common with both of those experiences is that each was only happening in my mind. The reality is that 98% of the time no one reacted and most didn’t even know. If I did catch their attention the most I would get is an odd look or a hand in front of their face. Actually, the few and only times I’ve been verbally assaulted I hadn’t even taken a photo and it was from homeless people in downtown who likely have had their share of lenses in their faces which is one reason why I don’t usually photograph them. Some people cordially ask me why I’m taking their picture and I tell them why depending on the situation. It’s okay that they’re curious and for me it opens up dialogue with the person and potential client. I’ve learned to carry business cards so if you haven’t made one yet I would suggest getting some. Many things had to evolve in my mind to be able to realize that the fear and anxiety was only in my mind. The mind is a very powerful thing and can be made to believe anything. Emotion is a bodily sensation that is caused by what we think. So knowing that, if we change our thoughts we can change how we feel. This isn’t a new concept but takes awhile to believe and put into practice. I work on walking around positive and curious. Positive that only good can happen, curious about what will be put before me to photograph and interested about what is going on in the world around me.

An anonymous person asked me here on tumblr, “What methods could a new street photographer like me use to overcome the fear of shooting random people? I tend to see a great picture and rush the shot or just let it pass.” Thanks for the question. I can very much relate to this and have learned that first the belief in the mind must change. The how is by going out and doing it as much as possible so that little by little the comfort in what you’re doing sets in. To answer the question for your self as to what negative could happen and finding that little does happen. Focusing outward rather than inward as you walk around. Pay attention to what’s going on around you, like to the light, the shadows, the interactions between people, their gestures, emotion, and life. Think about how you would frame it and present it. Try changing the thoughts of being sneaky and intrusive to you just being curious and interested. So what if someone thinks you’re a little weird for looking at them and taking a photograph. You could be that happy tourist walking around town for all people know. Believe you are an artist creating your next masterpiece. Believe that at that moment you were meant to be there and take that photograph.

You can even try making assignments for yourself as if it was a job and the assignment could be that you, the photographer, must go out and take a photo of a street scene for the next Sunday paper. If it was your job to do it could it change how you think about it? Projects are always a good thing to start.

It helped me early on to ask people to take their portraits. Now, there’s debate out there about this not being considered as street photography but for the purposes of my answer this does not matter. Approaching people takes courage. Asking for something from a complete stranger takes courage. As a man I know of this from trying to approach an attractive woman. Some will reject and some will not. That’s just how it goes. So, I walked around and asked people who in my opinion had character if I could take their photos. Increasingly I found that most were positive about it and didn’t mind at all. After the first few that I approached I realized that it wasn’t that hard anymore and slowly the anxiety and fear began to diminish. It’ll always be there deep inside but if it wasn’t my body and mind wouldn’t be doing its job of self-protection. Some said no and I had to get used to it. Some people just really do not like their pictures being taken. Walk on and stay positive that the next one will say yes. This could become your ‘pick a number’ strangers portrait project or something like that. Mine was people in hats and it made sense to me because I sport a fedora. It’s helped me with portrait photography in general also. I’d suggest trying it out and seeing if it works for you.

One of my blog posts (Feb 15, 2012) was about having a positive attitude. Part of it is thinking that nothing negative will happen to me and that only positive things will happen. I’ve noticed myself smiling more when I’m curiously walking around wondering what my eyes will feast on next.  Of course I get down sometimes but then get up again. (Just reminded me of that song.) It’s so important in my opinion to be positive. I’m just stating what I’ve worked on and got results from and what I think has worked for a lot of other people.

When we get nervous, anxious or fearful we tend to forget to breathe so take a moment, take a deep breath and then exhale. Do it a few times until you begin to relax. Breathe deeply while you’re walking around or standing around waiting for the shot. For me it’s a meditation so breathing is a huge part of it. I find myself more conscious to my surroundings and in tune with myself. The more oxygen in my brain the more relaxed I am. I’m big on vibes and energy so if you’re nervous or feeling creepy that’s the energy you put out and will likely get in return and so goes the opposite, if you’re positive and happy that’s the energy you put out and get in return. A photo walk should be pleasant, relaxing and fun, so breathe, relax and stay calm then repeat.

It’s been said before but I’ll say it again. “Smile!” I think it helps to be less threatening. People have told me that I’m non-threatening and it’s possible it’s because I smile. A smile goes a long way. There’s just something about it that puts people’s guard down especially if it’s genuine. A “Thank you” is always good to hear but again it’s your choice. You can say or not say anything at all. The person may have not even realized that you took his or her picture and you voicing your appreciation would be a little out of place. You might be more social and like to talk to people so you may already know the benefits of this. Maybe you’re not so social but the right smile can be a good non-verbal communication to use that expresses positivity anyway.

So, begin to change your mind and beliefs on being nervous, anxious, self-conscious and fearful to being positive, curious, interested, adventurous and courageous. Go out and shoot as often as your schedule allows because the more you do it the less fear you have eventually. Begin small projects and goals for yourself. Breathe, stay positive and don’t forget to smile. I’m no expert and only expressing my own experiences as I continue to learn and develop but think about what I’m saying and try some of these things out. Give it some time and keep what works for you.

technology write for us(non-registered)
anxiety will stay an enemy of the mankind for eternity, it is there we can't just get away from it if we want to do something better then we need to do something better.
organic arhar dal or toor dal(non-registered)
Thanks for your blog. It is well written and easy to understand. I regularly visit your blog for more interesting topics, that is why I am here. I also want to share some information especially for those who are more concerned about their health may visit organic pulses in india. In our online organic store, we made a collection of organic pulses like moong, masoor, Chitra rajma, organic arhar dal or toor dal, and others.
Create Bing Ads Account(non-registered)
I love the unique and random photography and you have clicked some street photography. I like it.
VeePN Promo Code(non-registered)
I just randomly came here and i must say the way you are providing your images for blog posts is so different and unique from the other photographers.
homes for sale in Petaluma ca(non-registered)
Thanks for your blog. I also want to share some information with those who are looking for a new home in California, then please contact us. we are an innovative realtor of housesofpayne to help you to <i> sell and buy homes, find the value of your home for real estate project anywhere in California or ca.</i>
No comments posted.
Loading...
Subscribe
RSS
Recent Posts
Yay! My video on the Fujifilm X-E4 is out on Fujifilm's YouTube! My Fujifilm X-E4 Article on the Fujifilm-X.com Website Fujifilm X100F: Initial Impressions for X100 Series Enthusiasts The Candid Frame & Alas Media Presents Street Photography: Rinzi Ruiz - Street Zen Art of Observation Birthday Thoughts Fear, anxiety, and self-consciousness help not the street photographer Chasing Light A Positive Attitude Passion Found
Keywords
fujifilm fujifilm x100f rinzi ruiz photography street zen x100f x-photographer
Archive
January February March April May June July August September October November December
© rinzi ruiz photography
Powered by ZENFOLIO User Agreement
Cancel
Continue